For wanderers and journalists alike, a new city is all about discoveries: the digging in to find an essence that might not get covered by the national media.

When I moved to El Paso, Texas, fifteen years ago, one of my major discoveries was the art of Bill Rakocy. Although Rakocy wasn’t well known outside of the region, he is one of the greatest chroniclers of life in the desert Southwest, both as it was and as it is.

When I first discovered Rakocy’s work, I had just moved to El Paso after living in Los Angeles for 34 years. So there I was, soaking up every shadow, every street corner, every face. I was eager to learn all I could about my new home.

At that time, the Hal Marcus Gallery sat on Mesa Street on the city’s Westside. When I opened the door to Marcus’ gallery, I became overwhelmed by a 40-year retrospective of Rakocy’s work. Who is he? I wondered. Who is this world-class painter who chose El Paso as his home?

At first, I soaked up the eclectic influences in his work: impressionism, realism, abstraction and expressionism that had been digested, mastered and then refined through decades in El Paso’s blinding sun and hot wind. At that show, a small oil called “Road to Newcastle, Pennsylvania,” served as a touchstone for the entire exhibit. This landscape of burnt trees, distorted roads and overtaxed telephone poles captured both a type of primitivism and old-world refinement, as if Degas ingested Max Beckmann and Van Gogh and then they all got stranded by the gritty railroad tracks off Paisano Drive in El Paso. From there, they could see the Rio Grande, Juarez, the Jesus Saves Rescue Mission and watch the cars fly by on Interstate 10; cars heading east and west for places like Los Angeles, Houston and New Orleans. Strapped with oil, watercolors and acrylics, these masters, I imagined, could paint until they became the wind, the nonstop blowing sand, the blinding sun and, finally, the shifting shadows off the last vestiges of the Rocky Mountains. Then, perhaps, they could all become collectively what Bill Rakocy is: A highly individualistic desert voice and vision. And then I forgot about him. But how does one really forget?

Twelve years later, I read in a local newspaper that a 50-year-retrospective was taking place at a new, larger Hal Marcus Gallery. By this time, a lot had changed.

I was now married and the father of two young children.

The gallery that day, which was packed with people, was full of work going back to the 1940s: oils, water colors and acrylics of El Paso, Juarez, Taos, Santa Fe, Italy and countless ghost towns forgotten by most but not by Rakocy. Historical figures like Pancho Villa and Porfirio Diaz shared space with anonymous street vendors and border-town musicians. It had all been digested, twisted, loved and rediscovered through Rakocy’s eyes and brushes. I was blown away by the savagery, the refinement, the punk ethos of get it down and get it done at any cost.

Rakocy has mastered so many styles that the untrained observer may doubt that the paintings are by the same artist. But they all bear his signature love of color. In some of his paintings, especially his water colors, his brush strokes are spontaneous, broad, modern, savage and beautiful, like the storms that suddenly overtake the mountains and creosote land and then dissipate as quickly as they form, leaving the smell of chaparral in their aftermath. In others, a Southwestern impressionist applies refined strokes of vivid color, so that one disappears into the El Paso wetlands desert scape, sits among mountain flowers or walks into a Colorado ghost town of the 1800s.

His self published, do-it-yourself books by Bravo Press were there too, with titles like Images: Paso del Norte; Ghosts of Kingston and Hillsboro; Villa Raids; and Trails to Ruidoso. They all served as historical primers to his commitment and fascination with his Southwest home.

When we left the gallery, I couldn’t get his work out of my mind. I closed my eyes and a ragged Taos landscape appeared, or was it the death mask of Pancho Villa? I also kept flashing back to “Layolia Church: Barrio, EP, TX,” a bold oil that portrayed the church’s neighborhood importance in wild hues of blues and pinks and shadows. In reality, the colors may or may not have existed on that barrio street, but they all worked in an organic extravagance of site and almost audible sound.

After a few days of this, I did what I needed to do. I went to the phone book, got his number and called.

If overwhelmed by his gallery retrospectives, I was almost knocked down by his “studios.” I say studios because it took four of them to house all of his artwork. My heart raced as I looked over decades of his daily discipline: stacks of oils in one corner, murals in progress in another, portfolios of sketches from his school days at the Kansas City Art Institute.

When I left, I walked out with a small oil and a watercolor. Somehow, I knew I’d return. We also talked that day for hours about writing, art and history, and Rakocy showed me dozens of turn of the 20th century black and white photos of Mexico, New Mexico and Texas.

I don’t want to say, in the end, that I became a junky for going to see Bill and his gracious wife Gloria, who is also a fine painter, but I did. My wife and I would scrape some money together, and off I’d go again, perhaps every three or four months.

About a week ago, I spent another two hours with Rakocy, and as I was getting back in my truck and saying goodbye, his paintings started dancing in my head. I noticed he hadn’t sold a recent main street portrait of Hillsboro, New Mexico, or was that “Telluride, Colorado, 1880’s”? That’s always my downfall because I’ll obsess and dream of it, and then we’ll see if there’s any cash left over, and then I’ll call Bill.

How long can this last? Hopefully forever, but I must remain realalistic. Rakocy is 85 years old now and I’m 50, but as long as there’s another chance to talk about art, the Mexican Revolution or El Paso, I’ll return. It’s all about creating, anyway, and what feeds our lives, might just feed our souls too. For Rakocy, then, it’s all about soul – the commitment to daily study, painting, and writing.

Here’s hoping the digging and work never stop. If they do, however, a lot will remain for the rest of us to enjoy. Maybe then we’ll remember a man who never gave up, one who kept on going until the digging was complete. 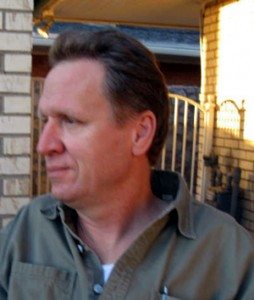 eighth book of poetry, Begging for Vultures: New and Selected Poems, 1994-2009, is forthcoming from the University of New Mexico Press. During the past 20 years, his poetry, essays and fiction have appeared in about 200 national and regional magazines and anthologies. Welsh is an associate professor of English at El Paso Community College.