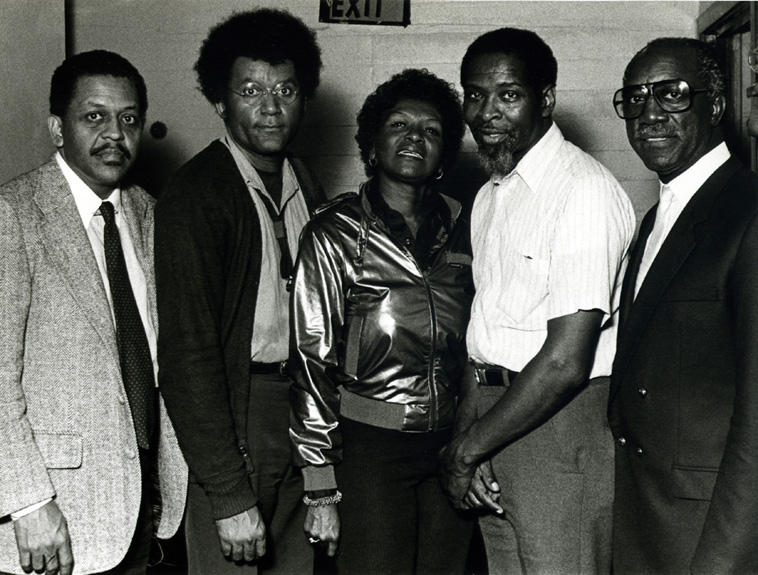 Bobby Bradford and John Carter had a quintet with two double-bass & drums from 1965 till John’s passing in 1991. This was in Los Angeles. In January of 1969 they recorded their first album SEEKING for Revelation Records and followed that in April 1969 with the album FLIGHT FOR FOUR on Flying Dutchman, then followed that with SELF-DETERMINATION MUSIC on Flying Dutchman in 1970, and then finally November of 1971 recorded SECRETS for Revelation Records.

AND that was it for a long stretch. They played all over Los Angeles and stayed active with their workshop jazz clubs, John at Rudolph’s Fine Art Center, and Bobby with his Little Big Horn. In late October of 1977 John released his Lp ECHOES FROM RUDOLPH’S with his trio + Melba Joyce on one track, on his own label Ibedon in an edition of 550 copies. Melba was Bobby’s first wife but was not married to him at the time of this photo. Bobby was married to Lisa then. Melba sings nowadays with the Count Basie Orchestra and lives in NYC and has her own big band that just appeared on Manhattan.

SO, it wasn’t until 1979 that you hear them together on a record, with a quintet, and that is the record VARIATIONS on Moers Records. The next time you hear Bobby & John together on a formal release is the short film THE NEW MUSIC circa 1980, where they play duets of such range and depth and contrapuntal buoyancy that all the rest of the world could see what we were hearing on a regular basis in Los Angeles with these two masters — John had switched entirely to clarinet at age 50, and that’s all he played from then onwards, him and Bobby on cornet.

Emanen Records would eventually release a couple concerts of Bobby & John in duets, called TANDEM. 1980 also saw the recording of John Carter’s NIGHTFIRE on Black Saint which was essentially a Carter-Bradford Quintet. The next time you hear them together is when John began to record his magnum opus ROOTS & FOLKLORE: EPISODES IN THE DEVELOPMENT OF AMERICAN FOLK MUSIC in 1982. This was a series of five suites that appear on 5 Lps and/or CDs starting with DAUWHE on Black Saint.

Part 2 was CASTLES OF GHANA on Grammavison. Part 3 was DANCE OF THE LOVE GHOSTS on Grammavision. Part 4 was the CD FIELDS on Grammavison, and finishing up with Part 5 in August of 1989 SHADOWS ON A WALL on Grammavision. My friend, the jazz historian, Kirk Silsbee explains the photograph: “Backstage at the Beverly Theatre, November 7, 1982. The evening was titled “The ABC’s of New Jazz” and featured the John Carter Quintet (with Bradford, James Newton, Roberto Miranda, and William Jeffrey), and the duo of Braxton and Abrams.

The concert was part of the week-long Los Angeles Kool Festival, produced by Helene Kann and Marty Kahn.” I myself was not at this particular concert, but Kirk tells me that the journalist Patricia Willard brought Artie Shaw backstage to meet John at this concert! And it is from this time that John and Artie maintained a friendship. —Mark Weber 26aug09 Albuquerque