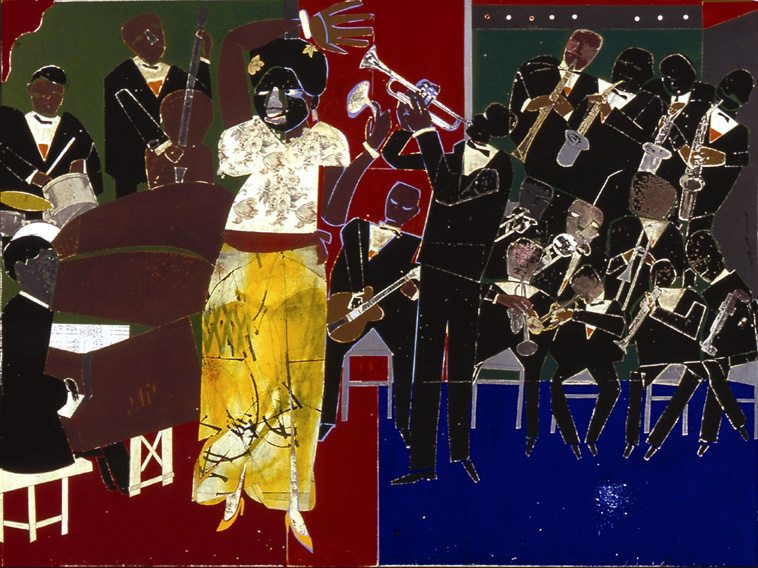 Romare Bearden (September 2, 1911 – March 12, 1988) was an American artist and writer. He worked in several media including cartoons, oils, and collage.

Bearden was born in Charlotte, North Carolina. He attended De Witt Clinton High School in the Bronx and completed his studies at New York University (NYU), graduating with a degree in science and education. He often put his education on pause to be a professional baseball player.

After he started to focus more on his art and less on athletics, he took courses in art that led to him being a lead cartoonist and art editor for the Eucleian Society’s (a secretive student society at NYU) monthly journal, The Medley.

Bearden also focused on the written art form. He wrote and published articles on numerous topics and is well-known for his written works. Among these talents, he also designed costumes and sets for prominent dance and theater companies, illustrated books by influential authors, co-wrote books about African American art and culture, and composed songs. Many years after he had stopped focusing on athletics, the Philadelphia Athletics offered him the chance to play professional baseball, only if he would agree to “pass as white”—an offer he refused, which jumpstarted his artistic growth.

Bearden grew as an artist not by learning how to create new techniques and mediums, but by his life experiences, and the different decades he created art and the different events that took place completely reshaped his vision of art. He studied under German artist George Grosz at the Art Students League in 1936 and 1937. At this time his paintings were often of scenes in the American South, and his style was strongly influenced by the Mexican muralists, especially Diego Rivera and José Clemente Orozco. Shortly thereafter he began the first of his stints as a case worker for the New York Department of Social Services. During World War II, Bearden joined the United States Army, serving from 1942 until 1945. He would return to Europe in 1950 to study philosophy at the Sorbonne under the auspices of the GI Bill. 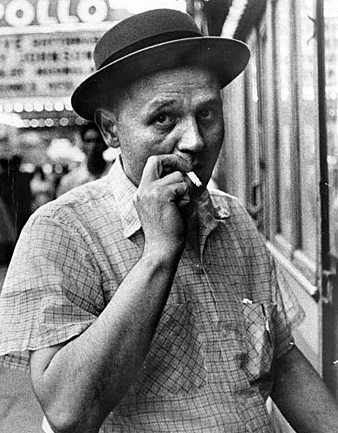 This completely changed his style of art as he started producing abstract representations of what he deemed as human; specifically scenes from the Passion of the Christ. He had evolved from what Edward Alden Jewell, a reviewer for the New York times, called a “debilitating focus on Regionalist and ethnic concerns” to what became known as his stylistic approach which participated in the post-war aims of avant-garde American art (Witkovsky 1989: 258). His works were exhibited in Sam Kootz’s gallery until his work was deemed not abstract enough.

During his success in the gallery, however, he produced Golgotha, a painting from his series of the Passion of the Christ. Golgotha is an abstract representation of the Crucifixion. The eye of the viewer is drawn to the middle of the image first, where Bearden has rendered Christ’s body. The body parts are stylized into abstract geometric shapes, yet still too realistic to be concretely abstract; this work has a feel of early Cubism. The body is in a central position and yet darkly contrasting with the highlighted crowds. The crowds of people are on the left and right, and are encapsulated within large spheres of bright colors of purple and indigo. The background of the painting is depicted in lighter jewel tones dissected with linear black ink. Bearden used these colors and contrasts because of the abstract influence of the time, but also for their meanings.

Bearden intended to not focus on Christ but he wanted to emulate rather the emotions and actions of the crowds gathered around the Crucifixion. He worked hard to “depict myths in an attempt to convey universal human values and reactions” (Witkovsky 1989: 260). According to Bearden himself, Christ’s life, death, and resurrection are the greatest expressions of man’s humanism, not because of Christ’s actual existence but the idea of him that lived on through other men. This is why Bearden focuses on Christ’s body first, to portray the idea of the myth, and then highlights the crowd, to show how the idea is passed on to men.

While it may seem as if Bearden was emphasizing the Biblical interpretations of Christ and the Crucifixion, he was actually focusing on the spiritual intent. He wanted to show ideas of humanism and thought that cannot be seen by the eye, but “must be digested by the mind” (Witkovsky, 1989: 260). This is in accordance with the time he produced this image, as other famous artists creating avant-garde abstract representations of historically significant events, such as Motherwell’s commemoration of the Spanish Civil War, Pollock’s investigation of the Northwest Coast Indian art, Rothko’s and Newman’s interpretations of Biblical stories, etc. Bearden used this form of art to depict humanity during a period of time when he didn’t see humanity in existence through the war (Romare Bearden Foundation, 1990). However, Bearden stands out from these other artists as his works, including Golgotha, are a little too realistic for this time, and he was kicked out of Sam Kootz’s gallery.

Bearden turned to music, co-writing the hit song Sea Breeze, which was recorded by Billy Eckstine and Dizzy Gillespie; it is still considered a jazz classic. In 1954, at age 42, he married Nanette (Rohan) Bearden, a 27 year old accomplished dancer and noted beauty who herself became an artist and critic. The couple eventually created the Bearden Foundation to assist young artists. Nanette Bearden was also instrumental in convincing her husband to return to visual art.

In the late 1950s, Bearden’s work became more abstract, using layers of oil paint to produce muted, hidden effects. In 1956, Bearden began studying with a Chinese calligrapher, whom he credits with introducing him to new ideas about space and composition in painting. He also spent a lot of time studying famous European paintings he admired, particularly the work of the Dutch artists Johannes Vermeer, Pieter de Hooch, and Rembrandt. He began exhibiting again in 1960. About this time the couple established a second home in the Caribbean island of St. Maarten.

Bearden had struggled with two artistic sides of himself: his background as “a student of literature and of artistic traditions, and being a black human being involves very real experiences, figurative and concrete” (Witkovsky 1989: 266), which was at combat with the mid-twentieth century “exploration of abstraction” (Witkovsky 1989: 267). His frustration with abstraction won over, as he himself described his paintings’ focus as coming to a plateau. Bearden then turned to a completely different medium at a very important time for the country.

During the 1960s civil rights movement, Bearden started to experiment again, this time with forms of collage (Brenner Hinish and Moore, 2003). After helping to found an artist’s group in support of civil rights, Bearden’s work became more representational and more overtly socially conscious. He used clippings from magazines, which in and of itself was a new medium as glossy magazines were fairly new. He used these glossy scraps to incorporate modernity in his works, trying to show how not only were African American rights moving forward, but so was his socially conscious art. In 1964, he held an exhibition he called Projections, where he introduced his new collage style. These works were very well received, and these are generally considered to be his best work (Fine, 2004).

There have been numerous museum shows of Bearden’s work since then, including a 1971 show at the Museum of Modern Art entitled Prevalence of Ritual, an exhibition of his highly prized prints entitled A Graphic Odyssey showing the work of the last fifteen years of his life, and the 2005 National Gallery of Art retrospective entitled The Art of Romare Bearden.

One of his most famous series, Prevalence of Ritual, concentrated mostly on southern African American life. He used these collages to show his rejection of the Harmon Foundation’s, the Chicago arts organization, emphasis on the idea that African Americans must reproduce their culture in their art (Greene, 1971). Bearden found this to be a burden on African artists, because he saw this idea creating an emphasis on reproducing something that already exists in the world. He used this new series to speak out against this limitation on Black artists, and to emphasize modern art.

In this series, one of the pieces is entitled Baptism. Bearden was influenced by Francisco Zubaran, and based Baptism off of Zubaran’s piece The Virgin Protectress of the Carthusians. Bearden wanted to show how the water that is about to be poured on the subject being baptized is always moving, giving the whole collage a feel and sense of temporal flux. This is a direct connection with the fact that African Americans’ rights were always changing, and society itself was in a temporal flux at the time he created this image. Bearden wanted to show how nothing is fixed, and represented this idea throughout the image: not only is the subject being baptized about to have water poured from the top, but the subject is also about to be submerged in water. Every aspect of the collage is moving and will never be the same more than once, which was congruent with society at the time.

In “The Art of Romare Bearden”, Ruth Fine describes his themes as “universal”. “A well-read man whose friends were other artists, writers, poets and jazz musicians, Bearden mined their worlds as well as his own for topics to explore. He took his imagery from both the everyday rituals of African American rural life in the south and urban life in the north, melding those American experiences with his personal experiences and with the themes of classical literature, religion, myth, music and daily human ritual.”

A mural by Romare Bearden in the Gateway Center subway station in Pittsburgh is worth $15 million, more than the cash-strapped transit agency expected, raising questions about how it should be cared for once it is removed before the station is demolished. “We did not expect it to be that much,” Port Authority of Allegheny County spokeswoman Judi McNeil said. “We don’t have the wherewithal to be a caretaker of such a valuable piece.” It would cost the agency more than $100,000 a year to insure the 60-foot-by-13-foot tile mural, McNeil said. Bearden was paid $90,000 for the project, titled “Pittsburgh Recollections.” It was installed in 1984.

Romare Bearden died in New York on March 12, 1988 due to complications from bone cancer. In their obituary for him, the New York Times called Bearden “one of America’s pre-eminent artists” and “the nation’s foremost collagist.”

Two years after his death, The Romare Bearden Foundation was founded. This non-profit organization not only serves as Bearden’s official Estate, but also helps “to preserve and perpetuate the legacy of this preeminent American artist.” Recently, it has begun developing grant-giving programs aimed at funding and supporting children, young (emerging) artists and scholars. In Charlotte, Romare Bearden has a street named after him, intersecting West Boulevard, on the west side of the city. On that site, Romare Bearden Drive is surrounded by the West Boulevard Public Library branch and rows of townhouses.

Romare Bearden is the author of:

Romare Bearden is the coauthor of: