Host Mark Weber will be featuring the music of David Sherr who is not only bi-coastal, shooting between Los Angeles and New York, but also straddles the worlds of jazz and classical. And quite successfully. Possibly why his first CD in 1999 was called LOOK BOTH WAYS.

There has been quite some ventures between these two worlds of music over the years, and much of it very interesting, because, simply, the two are not that much different from each other. Mostly, it merely requires a pair of ears that listen, and the rest is music. 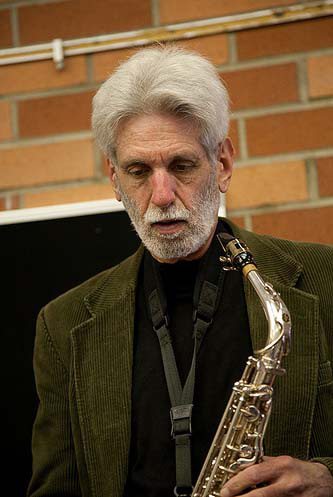 Maestro Sherr’s compositions are some of the most captivating interpolations between the two worlds I have ever heard. I would think Gunther Schuller would be very happy to hear this material. (Schuller was one of the movers and
shakers in the Third Stream Music movement of the late 50s on the east coast who worked to formalize jazz + classical.) We’ll be listening to the music of David Sherr, as well, as having a Live telephone discussion with David from New York.

There is a magical sense of connection between all of the elements of David’s music — and indeed, one of his characteristics as a composer is his focus on sequences, and how one thing follows another, how it all is threaded together. And with this he draws you in, captivates your attention.

We’ll also be asking him to tell us about the immortal sessions with saxophonist Sonny Criss that resulted in the album SONNY’S DREAM where David played lead alto sax in the studio orchestra working over Horace Tapscott’s music and arrangements in 1968. As well, his years as a working musician in the Hollywood studios.

You’re homework assignment prior to the broadcast is to listen to Edgar Varese’s “Integrales” three times in one day. This is a good piece of music composed for a chamber ensemble of eleven woodwinds and four percussion that will stretch your ears and get you loosen’d up for David’s music. It is 9 or 10 minutes in length. Easy.