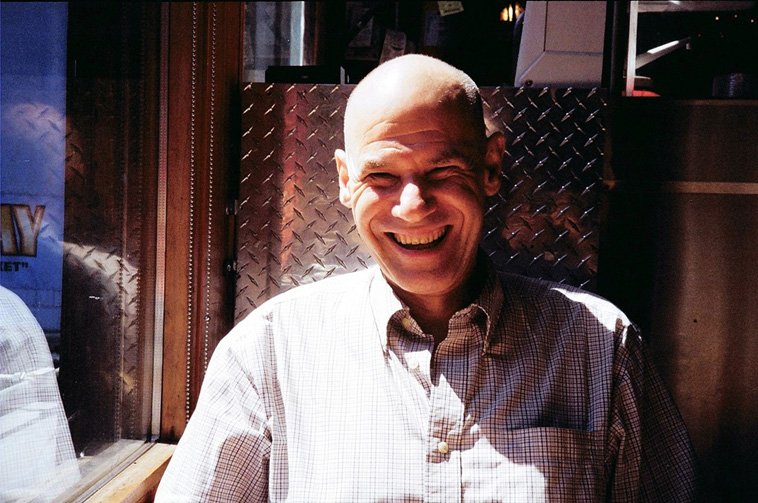 right after this photo….

we were having breakfast at Fairway on Broadway somewhere
around 70th — Fairway is a health food
supermarket with several locations on Manhattan — this one
has a restaurant on the 2nd floor — Richard is
a health food nut — I can’t
remember what he had, probably granola and berries —
I had fried eggs and corned beef hash and toast and hash browns
and black tea, unsweeten’d —
the plan was
to eat and then catch a crosstown bus over to the east side, to this
high-end stereo store and
see if they’ll let us listen to Richard’s new CD master —
working title: SYMPHONY FOR TRIO —
contrary
to what you hear about New Yorkers they are actually
very nice people, and the salesman, Bob, said No problem,
let me put you in the back room with the Hansens
(Lyric Hi-Fi, 82nd & Lexington) — the Hansens turned out
to be this set of speakers that cost $84,000 and each was
power’d by its own McIntosh amp, which in turn was controlled
by another McIntosh — the cd player was a Puccini DOS —
what a mind-blowing hour & a half we spent in that room —
Richard Tabnik has made a record of pure lyricism, not an
ounce of fat or filler, plenty of vinegar, a touch of sweetness
when called for, but alto saxophone soaring with lyric
invention and
searing intent
backed by Roger Mancuso, whose idea of drums
is so incredible I can only describe as abstract impressionist
spontaneous response rolling swiftness & alertness & time
conscious in the extreme, but with nothing even remotely
resembling a backbeat, it’s all music —
with Adam Lane holding it all together with his bass so
intelligently, knowing when to walk and when to stroll
and when to float
it all just floor’d me so intensely IF
this record ever comes out there won’t be a chance in hell
it could be ignored — it is as good as it gets—mark weber | 29july09

Some Richard Tabnik cd’s are available by clicking here…

mark weber | hal mckusick and the finger snap of modernism