moe! staiano | death of a piano

Moe! Staiano’s Moe!kestra! will celebrate 10 years of orchestrated cacophony with performances of Piece No.1: Death Of A Piano and the new composition, Piece No.9: When Terrie Had Six, based off of conducted improvisational notated performances from 2006 and music from the Ex. A before-show discussion/Q&A with Moe! Staiano will talk about the history and nature of Moe!kestra!. Presented by KFJC. Sponsered by 21 Grand.

The show will also celebrate a new CD release of the Moe!kestra! with “Two Rooms of Uranium in 83 Markers“, an album of two performances that features Ches Smith, Marika Hughes, Carla Kihlstedt, George Cremaschi, John Shiurba, Scott Rosenberg, Myles Boisen among countless other musicians. Copies, along with the two other Moe!kestra! releases as well as T-Shirts, will be available for purchase.

Hope to see you there! Pass this along and bring eye and ear protection! Moe! Staiano is a percussionist who usually uses found objects, but has moved to doing drumming on found objects on his trap set (i.e. prepared percussion). Moe! (yes, he includes the exclaimation mark in his name) has experimented through the years though solo percussion using pipes, food pans, pressure caps, sheet metals, nick-nacks & other stuff that has been found, given or stolen (mainly from Pizza Hut when he worked there including a nifty Spatula that he bows). One can expect to see Moe!’s show as a visual eye pleaser: running around throwing pipes on concrete, walking on pans with his feet to mute sounds or running amok, throwing his body into old cassette tapes or two dozen cymbals in any given performance. His shows can sometimes expect a big mess in one fashion or another (which he replies that the aftermath of his performances represents his life) with implements of mixers & vibrators on objects spewed throughout the set. He’s been a good boy cleaning up after himself, too. He has two CD’s out of his solo/collaborative recordings. The second CD, “The Lateness of Yearly Presentations” was released in 2002 on his micro-label Dephine Knormal Musik, a release split with a French label, Amanita Records. The first solo CD The Non-Study of First Impressions, is now out of print. He finished recording and mixing a third solo CD due next year, entitled The Absolute Tradition of No Traditions and will be released through Psychform Records.

Formaly, Moe! was a member of two important bands: Vacuum Tree Head (formerly doing metal percussion and then playing trap set) and with Sleepytime Gorilla Museum (doing THE metal percussion), a band that consist of Carla Kihlsteadt, Nils Frykdahl, Dan Rathbun (all from Charming Hostess, two from Idiot Flesh) and Mathias Bossi. Sleepytime Gorilla Museum has one release on Seeland (Negativland’s label) and a live CD on Sickroom Records from Chicago as well as a second studio album out on Web of Mimicry, Of Natural History. Many of the members, including Moe!, collaborates with the butoh dancer Shinichi Momo Koga under that company name Inkboat & have performed around Seattle, Mendocino & San Francisco. Moe! has formed a new band called Mute Socialite with guitarist Ava Mendoza and bassist Alee Karim and are currently looking for a second drummer, a trumpet player and someone who can sing very well. Performances with this band will soon follow.

Moreover, he does text/graphic scores for a collective ensemble for what he calls MOE!KESTRA!, which employs many musicians, well at least between 15-45 players (and sometimes more, sometimes less than those numbers), and play scores Moe! has written including a piece for destroying a piano (Piece No.1: Death of a Piano), sex toys (Piece No.2: Death by Dildo; which once got sponsored by Good Vibrations…seriously) among four other pieces that have been performed though 1997-2005 (seven pieces in all; about 40 performances & counting). Fellow employees has included ROVA’s Bruce Ackley, George Cremaschi, Michael de la Cuesta, Cheryl Leonard, Matt Ingals, Fred Frith, William Winant, John Shiurba, Bill Horvitz, Tom Yoder, Aaron Bennett, Dan Plonsey, Garth Powell, Peter Valsamis, Kris Force (Amber Asylum), Jonas Muller, Adam Lane, Matthew Sperry, Jonathan Segel (Camper Van Beethoven), Tony Maimone (Pere Ubu, They Might Be Giants), Michael Evans (God Is My Co-Pilot), Sean Meehan, Shelley Burgon, Danny Tunick (Guvner), David First, all past and present members of Sleepytime Gorilla Museum among many other musicians. In 1999, he wrote & conducted a piece written for the Seattle ensemble, the Degenerate Art Ensemble, entitled “Piece No.6: And They Swore They All Slept Soundly“, which was also performed by the Moe!kestra!. The debut disc of Moe!kestra! was released in June of 2003 of two conducted improvisations entitled “Two Forms of Multitudes: Conducted Improvisations“. He’s currently planning on releasing more Moe!kestra! material in the near future and hope’s to write more in the near future. One piece entitled “Piece No.7: An Inescapable Siren Within Earshot Of Hearing Distance Therein And Other Whereabouts”, was written for guitars (played with all low E-strings played with a coiled implement), strings, percussion, u-bolts, wine glasses and sirens. A recording of that piece along with another large orchestra piece is now out and available on CD through Rastascan Records/Amanita Records. He completed a piece that was performed at the San Francisco International Arts Festival called Piece No.8 for strings, percussion and prepared guitar last year. May of 2007 will mark the 10th anniversary of Moe!kestra! and is planning on performances in Portland and San Francisco (and maybe Seattle) with a massive 100-piece (give or take, of course) ensemble with a new composition as well as performances of Death of A Piano. Any inquireries for spaces and musicians are welcomed.

Moe! has still not yet gone through any music theory. 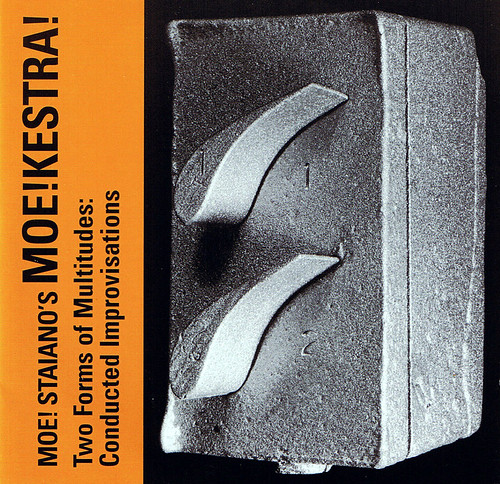 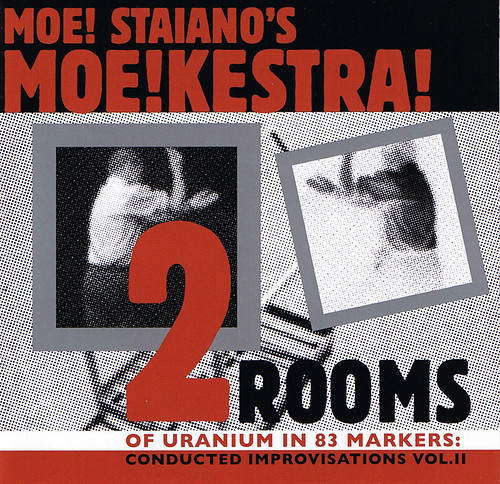 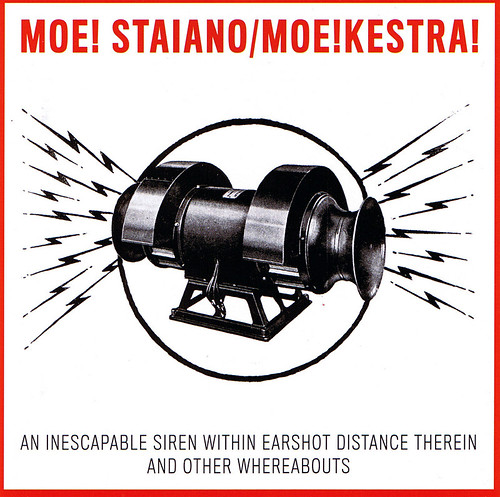