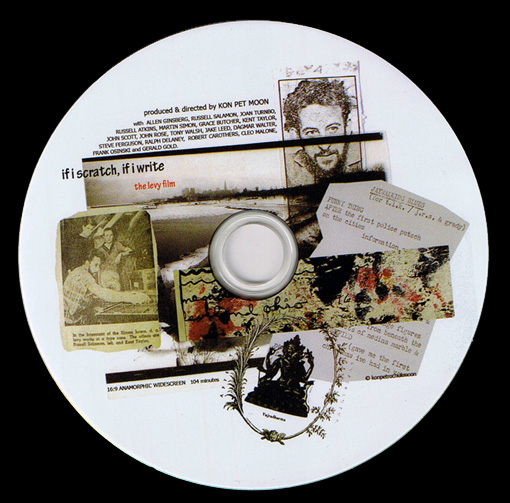 This dvd is the end of a 20 years process in the final completion of this film about d.a. levy. The film changed several times its original concept of just mixing readings of levy’s poetry with images of his artwork and publications. It wasn’t meant to be a documentary, but then it had to become a documentary as I started meeting people who knew levy and what he was about. The film was 75 minutes long in 1985 for the premiere screening at MOMA/NY. It was reedited to a 55 minute “broadcast-length cut” in 1987 when PBS became interested but then backed out. After the PBS reedit, I moved on to other things but always had feelings of ‘incompleteness’ and regret on not having restored the film, especially after learning about and empathizing with levy and his life. I felt and still feel very close to levy; it’s like where Gary Snyder wrote, “I feel brother to levy…in the Buddha-fields.” Then around 2003 Mark Kuhar and Larry Smith got hold of me to show levy film stuff at the 2005 levyfest in Cleveland, and I realized that this was the time to restore, expand, make a dvd, and complete the film. —Kon Petrochuk (aka: Kon Pet Moon) Please visit Kon Petrochuk’s web page by clicking here… 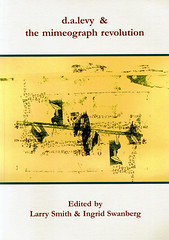 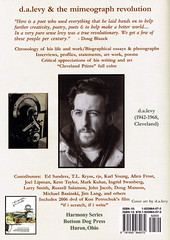 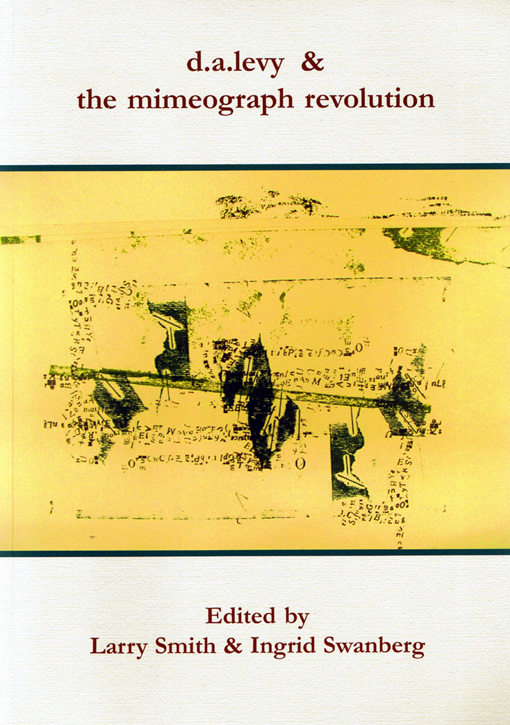 Like the archetypal hero of the old Irish drinking song, d.a.levy has been dead a long time but just won’t lay down. New editions of his work have appeared periodically and, lately, with some frequency, as well as a few online collections/archives. d.a.levy & the mimeography revolution is a robust, at times charmingly haphazard, approach to the man, his work and cultural resonance.

The book is divided into sections dealing with biography, interviews with levy, close friends and associates, criticism, and a selection of his written and graphic work. So, you may ask, what’s the deal? A history of levy is, in fact, an important historical snapshot of the small press movement itself and, for better or worse, the chaos that was 60’s America, specifically the then near police state known as Cleveland. levy himself was a poet, artist, and publisher, with a tendency toward manic-depression and a condition that might be called chronically suicidal.

The interviews, article by Karl Young, and work by T. L. Kryss particularly standout and, at times, even overshadow the rest of the volume. That is an irony that would never be lost on levy; revered more as a cultural icon than a poet/artist, his persecution by the Cleveland fascista and resultant self-inflicted assassination (bullet to the Third Eye in the lotus position, as legend goes) is so impossibly sad as to approximate levy’s own despairing depression. In each article, interview, and poem, the same sparse facts are gone over again and again; his obsessive dedication to poetry and putting Cleveland on the poetic map, his written attacks against the status quo and the local political machine, his persecution and arrest for obscenity and corrupting a minor (for reading in public the minor’s own “obscene” poem while said minor was present), his fascination with telepathy. Though not intended as an anthology of his work, a larger selection would have put things into context, especially for those unfamiliar with levy. This, however, is made up for by the inclusion of Kon Petrochuk’s 75 minute film, if i scratch, if i write. An important work in it’s own right, this helps make d.a.levy & the mimeograph revolution a fine starting point into the man and work. For more poetry, check out The Buddhist Third Class Junkmail Oracle: The Selected Poetry and Art of d.a.levy edited by Mike Golden (Seven Stories Press) and ukanhavyrfuckincitibak, edited by rjs (Ghost Press). — Don Wentworth, Editor Lilliput Review, 282 Main Street, Pittsburgh, PA 15201. http://lilliputreview.googlepages.com/home | Email: lilliputreview@gmail.com | Issa’s Untidy Hut – The Lilliput Review Blog | http://lilliputreview.blogspot.com/

Eight minutes of excerpts from the 105 min. feature doc about the remarkable poet d.a. levy. This film uses a conceptual “cut & paste” like digital editing style to present interviews, artwork, locations, and other bits and pieces about levy’s intense life, times, and poetry. By K. Petrochuk /aka: Kon Pet Moon.