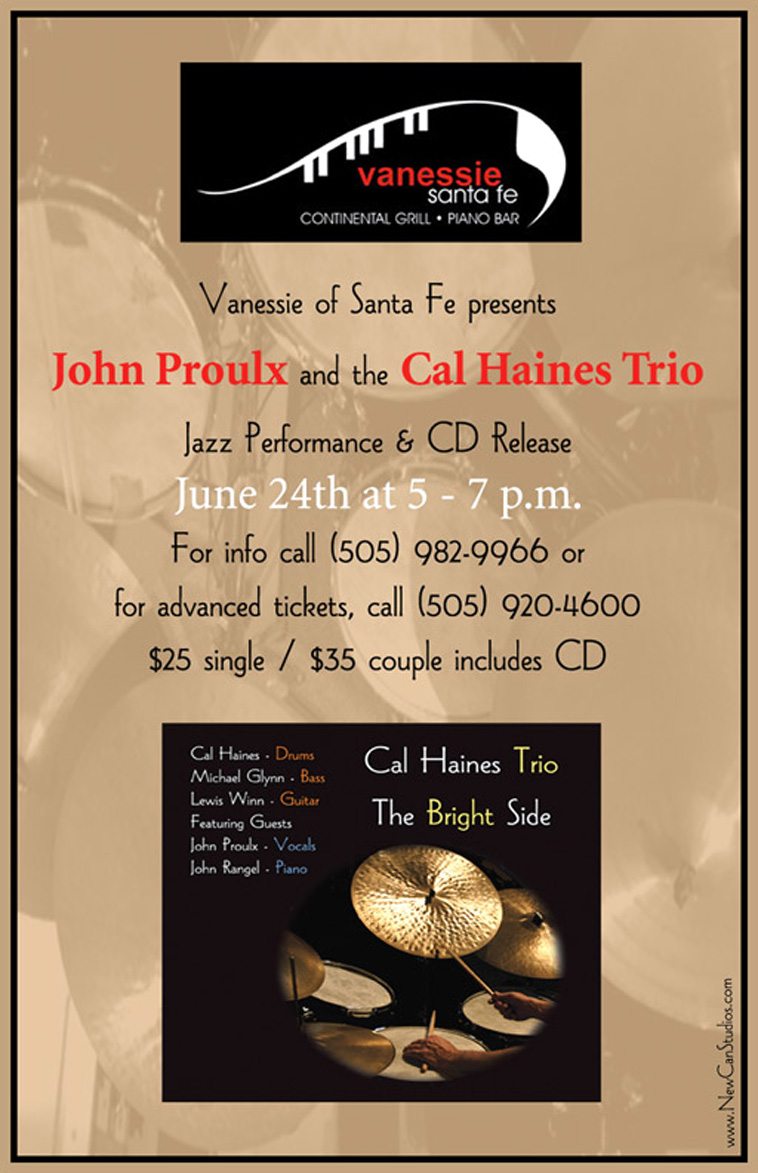 I want to tell you about an exciting event (well atleast to me) I have finished the recording of my first CD. The release party for that will be at Vanessie here in Santa Fe on June 24 from 5 to 7pm. I have attached the poster for the event.

The other part of the debut is a gig at the Outpost in Albuquerque on June 25th . This performance will be divided in two sets, The first is my trio plus John Proulx on several songs and then the second set will feature John Proulx’s upcoming CD release. This set will include my trio and will feature Bobby Shew also. Thanks. Cal Haines Cal lives in Santa Fe and plays jazz drums in the surrounding area. Playing in a jazz group offers many opportunities for rhythmic exploration and interpretations of energy as varied as your mind can imagine. Cal uses this improvisational approach in creating his photos, letting each photograph develop according to the energy and feelings present at the moment.

Jazz musicians improvise and alter existing song forms making each performance unique. The outcome is influenced by a number of factors including personal feelings at the moment, skill levels and attitudes of the participating musicians, and the interaction and energy exchange with the audience. The improvisation is a synthesis of those feelings and energies and exclusive to each performance.

Cal Haines has been playing professionally for over forty years. He grew up in Canton, Ohio and studied drums in Cleveland with Charlie Wilcoxin. He was drafted into the Army and played in the Army Band in Augusta, Georgia and in a USO show based in Atlanta. He attended Kent State University and Memphis State University where he played in the percussion ensemble, marching band, concert band, wind ensemble, and the jazz bands.

While in Memphis, Tennessee he performed with Diahann Carroll, Rich Little, Bob Hope, Charlie Rich, Ray McKinley and the Modernaires, Al Greene, Danny Thomas and the St Jude’s Telethon, Clark Terry, Marvin Stamm, and Yul Brenner in the “King and I.” He moved to Nashville where he performed at the Opryland theme park for one year. He then moved to Santa Fe, New Mexico where he performed with Emily Remler, Bobby Shew, Dee Kelly, Richie Cole, the Albuquerque Jazz Orchestra, Real Time Quartet, and at local concerts in connection with the New Mexico Jazz Workshop and the Outpost Performance Space. Cal then moved to California where he played gigs with Llew Mathews, Teddy Edwards, Max Bennett, Eddie Ambrose, Jim Gordon and others. Cal has returned to Santa Fe to continue his drumming career and explore photography.

Most memorable gigs: playing the “1812 Overture” with the Memphis Symphony during a July 4th concert on the banks of the Mississippi River; playing the “Fanfare for the Common Man” with Aaron Copeland conducting the Memphis State wind ensemble; playing with Phineas Newborn Jr. and George Coleman in Memphis; marching at the Astrodome in Houston, Texas; trading drum solos with Roy Burns in Memphis; opening for Michael Brecker with Emily Remler at Popejoy Hall in Albuquerque; opening for Etta James with Emily Remler at the Pines in Santa Fe.

more on Cal Haines and his work as a photographer can be seen here… If you are looking for ideas to illustrate CD covers or other kind of publication, please contact Cal. mark weber | hal mckusick and the finger snap of modernism