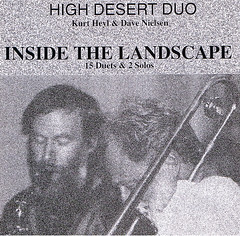 These guys rewrote the Declaration of Independence. Homegrown and sky high. To me, jazz generally speaks of big cities. Here we have a breakthrough to the language of the high mountainous deserts & sagebrush of New Mexico. Music rating: organic

click on the covers for more detailed information please ! 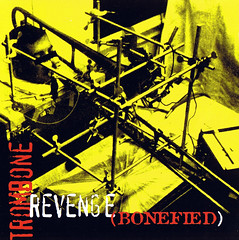 click on the covers for more detailed information please ! The trombone was there right at the start of jazz — before the saxophone, certainly — but we still don’t think it’s cool. There are few famous jazz bone men, and none of them are household names. Oddly, that’s meant that many players in the various free improv “communities” (whatever that means) have been attracted to it. It’s a viable, versatile instrument with a real jazz history and great potential for extended techniques but a well-developed, clearly-defined set of conventional ones. Little wonder, then, that it seems to be more widely adopted now than ever.

The players associated with Zerx were bound to be part of this, I suppose, because Zerx has long been interested in the intersection of early twentieth century musics like blues, honkey tonk and folk with the avant garde (they probably don’t even call it that). The trombonist could get to the very heart of the gutbucket and was, of course, literally to be found on the tailgate from time to time. Well, prepare to be surprised, then, because while their releases do have some connections with that world, they’re not on open display here.

Bonefied are a mainly-trombone and almost-all-brass ensemble playing sometimes humerous, often rather funky improvisations. They must be a blast live, and this loud, brash recording captures much of what’s attractive about the trombone. It’s also nice to hear instruments like the sousaphone and euphonium cropping up here, instruments created for, and limited mainly to, military marching bands, a tradition strongly drawn on in this music without it ever being overpowering. Fear not: there are no Sousa cover versions here (it might have been fun to include one, but it would have been a bit obvious, too), and the improvisations, while rooted in free jazz, are often sometimes energetic, making for an extremely likable record.

J A Dean’s solo disk is as a different a kettle of fish as you can imagine. The electronics, to be fair, are very strong here, with long, evolving dronses dominating the music, but this still purports to be a trombone album (there’s even a picture of the thing on the cover), albeit one which sounds nothing like trombones. The pulsating soundscapes will be a bit new-agey for many readers’ tastes, but it’s an interesting CD of well-executed concert improvisations using electronics which are, presumably, controlled in part by trombone. The first track, an expansive half-hour-long panorama, is probably the best of the lot, and reaches an impressive white-out of rock-inspired noise.

The High Desert Duo’s is another non-trombone trombone record, really, given that each of the duo members play at least five different things and only one of those things, in one case, is a trombone, played by Bonefied member Heyl. Duos like this can be awfully annoying: nobody, but nobody, is a really good drummer and reeds player, for example, and doubling up like this looks suspiciously like an artificial injection of variety designed to mask an indifferent talent.

Heyl is a really imaginative trombonist with plenty of swagger and raconteurship which mostly make up for a slight technical deficit. Nielsen isn’t much of a drummer, and it’s a shame he feels the need to play the things from time to time. He sounds reasonably confident on bass clarinet and plays some nice stuff on the vibes, though, especially alongside Heyl’s unlisted recorder, wooden flute or similar on the effective 12/30/99#2 (they’re all titled this way, something to be encouraged).

Heyl has some limited extended techniques under his belt, mainly vocalised sounds and extreme tongued articulations, but his conventional playing is pretty lazy. The ideas are there, and very promisingly so, but he just can’t quite nail them when he needs to. That makes this a sometimes frustrating recording, although there are really pleasing moments, too, and the overall approach of risk-taking and searching is impressive, if not always successful. Fortunately, the music is played as seventeen short pieces, so it’s easy to find favourite bits.

No technical worries with the CIMP set, which has Fiedler’s eloquent trombone partnered by Koen’s equally smooth-talking sax. This is far more conventional free jazz, of course, and it isn’t fair to compare their chops directly with the High Desert Duo’s — free improv has never required the straight technique which free jazz does, one of the easiest ways to discriminate between the two styles of playing. Still, though, it has to be said that the feeling that one is in safe hands here is rather reassuring.

Again, the pieces here are concise and to-the point, but in contrast to either of the other CDs reviewed here, this one uses a small degree of composition to create starting-points for each improvisation, just as free jazz groups usually do. Sometimes these fairly simple melodic “hooks” sound a little odd, as if shoved into the music because that’s the piece which is being played, only to be dealt with cursorily and abandoned for the real business at hand. Still, there are some good moments: the composed section of the title trach, for example, makes fine use of overtones and when Koen comes back for a solo with a clean, clear tonal line the contrast is beautiful, not jarring.

In all, this is a very successful trio set. Neither Fiedler nor Koen is a flashy player, but they have a poise in their playing and an admirable focus to their improvisations; Ware, meanwhil, plays with great verve, although one suspects he might have felt happier is a bass player were present. As it is, he has a lot of work to do; fortunately, he gets on and does it, and fills out the sound rather well. What’s most important, though — and this is something they share very strongly with the High Desert Duo and Bonefied — is the “feeling of warmth and communal spirit” they refer to in a brief sleeve note. That sense of co-operation and mutuality which pervades improvised music is well demonstrated by any of those releases. It seems that, in the early twenty-first century, the trombone has many voices, probably as many as there are trombonists, so that the paradox within this music — that it’s as individualist as that, and yet as collective as it is, too — will continue to perplex us for a while yet. Richard Cochrane